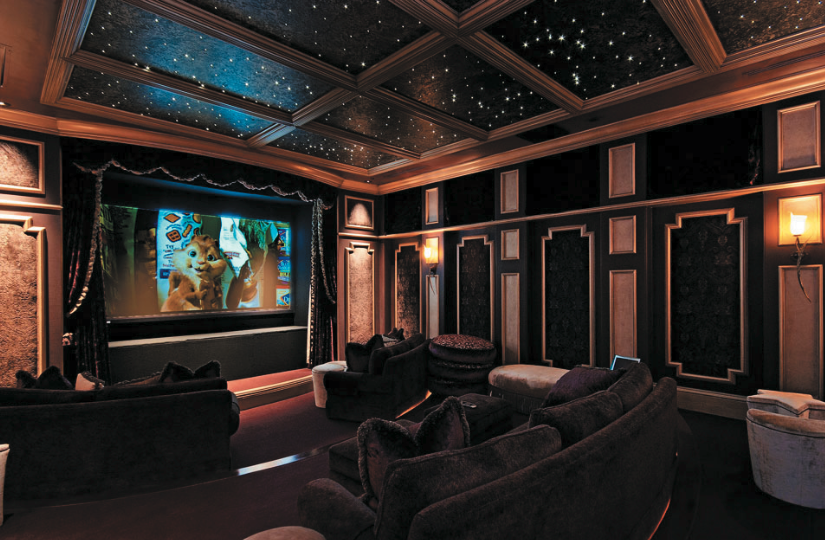 The earliest documented account of an exhibition of projected motion pictures in the United States was in June 1894 in Richmond, Indiana by Charles Francis Jenkins. Jenkins used his Phantoscope to project his film before an audience of family, friends and reporters. The film featured a vaudeville dancer performing a Butterfly Dance. Jenkins and his new partner Thomas Armat modified the Phantoscope for exhibitions in temporary theaters at the Cotton States Exposition in the fall of 1895. The Phantoscope was later sold to Thomas Edison whom changed the name of the projector to Edison’s Vitascope. With the Vitascope, Edison began public showings of his films at a music hall called Koster and Bials on 34th Street in New York City on April 23, 1896.

Close to 120 years have passed since that quaint period of innovation and the movie industry is one of the largest industries in the world, integrated into every aspect of our lives. With the transformative technology offered today for the home theatres, the cinema at home is a high sought luxury.

I remember our first home theater; it was a giant white screen that pivoted and pulled up into place on a nifty tripod stand, with a reel projector set on a load of books atop the cocktail table to get the projection in decent alignment with the screen. Of course the whole time while Dad got it square with the screen, us kids composed the bunny and dog shadow show performance as the opening entertainment! We watched home movies and claymation movies of dinosaurs attacking, and eating my Hot Wheels that my brother and his friend worked pain staking long hours on, to produce a 5 minute movie!

Today I find myself designing spectacular home theaters. The movie screen and projectors are getting traded in for super huge flat screens, speakers with maximum surround with cleverly designed sound-proof walls and columns. One of my favorite theaters that I designed looked like this: I lined the walls with red mohair and furnished the room with motorized reclining yellow leather chairs. The theme was Lamborghini Yellow and Ferrari Red. It was sharp! That’s what’s so great about the home theater! You can pull out all the stops; it doesn’t have to conform in style to all of the other rooms of your home. It can have a zest of its own. I appreciate a common thread, or theme to the home decor, but you can certainly pile on the gilding the intensity of color and showmanship of fabrics in this room.

The cat’s meow, if you will, is the home automation of all the moving parts! Being able to have the shades drop, the screen drapery open, the lights dim and the movie turn on, with the press of a single button on the remote…that is awesome right? In fact, this technology has been around a long time…over 15 years. Twinkly fiber optics for a starry night, concealed step illumination and pretty sconces are just some of the lighting techniques that can offer light in the dimmed room. From motorized reclining seats with individual cup holders built in, to comfortable chenille covered sectionals with oversized floor pillows, there are endless options to the seating configurations to suit your movie viewing style and comfort. How we watch the movie, the movie is ever evolving technology. The Star Wars 3D video from R2D2’s chest appearing in midair is really the only thing I can think of that needs to be accomplished for real; possibly it already does, but I have not had the pleasure to design a home theater around that yet! The word theater typically being reserved for real actors on a stage: for now it should referred to as the “Home Cinema.” The same screen that will someday be antiquated and our children’s children will laugh at the thought of the way it looked in the old days!

I think the thing I miss most of the “old days” of movie watching in my house was the smell; apparently it’s called vinegar syndrome, which is the decomposing of the acetate film breaking down. Doesn’t sound like a nice smell to miss, but whatever the old projector and film fumes were, it’s still pretty distinct in my mind and carries fond memories of my mom sitting poolside looking like a young starlet in her 1960’s bikini and cat eye sunglasses! I can see my children writing about “that old, big, black, flat screen on the wall that looked like a stagnant portal to another dimension when turned off, on the biggest wall of the house!”

For now though, we do have great products, lighting, technology, and furnishing that make a superb home cinema for a residence that can afford the space to dedicate it solely to the viewing of movies. relaxed space. I love the opportunity to design this carefree and relaxed space.

← Intro to Athena’s Blog
Why Use a Designer? Why Use Odyssey? →